I suppose there has been one topic which has dominated all conversations the world over today, - Paris. Such a terrible, terrible thing, why do people have to resort to killing people just to get their own way?

Ina Sonnenmoser was thinking about the events yesterday, whilst she was tangling, and ended up inventing a new tangle pattern called Paris, in rememberance of those who died. Many of you may have already seen it around, but for those of you who haven't you can find the step-out and examples here:- Paris

The Diva's challenge this week is Tripoli, I love this tangle and use it a lot, there are so many ways of drawing it. Today I have drawn an almost Monotangle ZIA for this. I call it an 'almost Monotangle' because the tangle, Paris, is a similar triangle shape to Tripoli and so, in rememberance of all those who died in that normally romantic city, I used Paris in just one section of this wreath  (on the lower left) . For the majority of the ZIA I used a different variation of Tripoli in each section. There are still more variations I left out. It is also great drawn with a touch of colour, but I stayed with the original black and white this time. 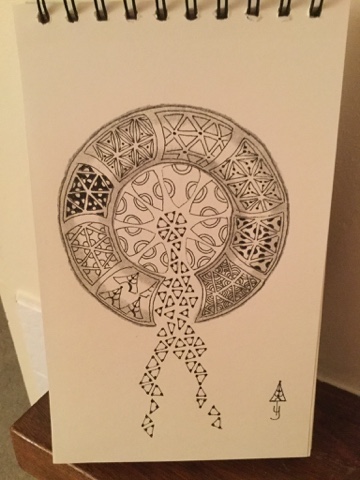 Posted by The Yorkshire Tortoise at 19:35