Sunday..... We have a bit of routine on Sunday's, even though we are retired. First of all is a bit of a lie-in. Only to 9am mind you, but when you have been awake since 6am that is quite a lie-in! Downstairs at breakfast we have a little bit more of a feast than normal. We don't have the full Irish (bacon, eggs, sausages, tomatoes, black pudding, white pudding and fried potato farls) but we do chose one of those items for after our bran flakes as a treat. Which one we have depends on how we feel, occasionally we will have two, say bacon and tomatoes :-)

Next is a walk to the newsagent (just at the end of the street) for the Sunday newspaper. We only buy a Paper on a Sunday, it has so many sections it takes us all week to read, meantime we keep up to date on a daily basis via the online free papers.

Cooking lunch is next followed by eating it :-) Why does it take ages to cook and minutes to eat? Every few weeks we open a bottle of wine. Today it was a bottle of fizz, Cava not champagne, after all it is only an ordinary Sunday. It is Pink Cava - I know, I know, the wine buffs will be having a fit, but there is something very happy making about fizz especially if it is Pink.

After that is the TV. When we were working we had an unwritten rule of no TV on Sunday afternoon, but now we have a more sedentary lifestyle and so that rule is often waived especially if it is raining. At this time of day it is usually sport - Hurley, Gealic Football, or Motor Racing, take your pick because I have an aversion to sport on TV! This is when SuzyMosh has excellent timing because I fire up my iPad and lo and behold her new challenges have appeared and I can get on with tangling :-)

She has two challenges now, the new one is on it's third week - Tangle Me Three - and the original challenge is 'That's New To Me' . Which shall I chose to do first? Well today I chose Tangle Me Three.  After the Pink fizz it didn't take me long to get into the zone. I am not sure it is 'The Zone' Maria talks about but it is certainly 'A Zone' lol.

This week it is Strircles that is the Monotangle. It is hard to think up two variations of Strircles because if you change the pattern under them then it is no longer a Montangle. I drew the original tangle on the bottom, then for my first variation I made a large Strircle with Strircles inside it, and for my second variation at the top I made only the outside edge of the Strircles change colour.

The 'That's New To Me' Challenge was an easier choice. We had H as the alphabet letter and an artist focus of Michelle Beauchamp. I chose H - Hep Mae was new to me and Blooming Butter for the artist focus. I kept it simple because I liked the tangles and I wanted room to display them.

Here are the results:-

The Tangle Me Three Challenge 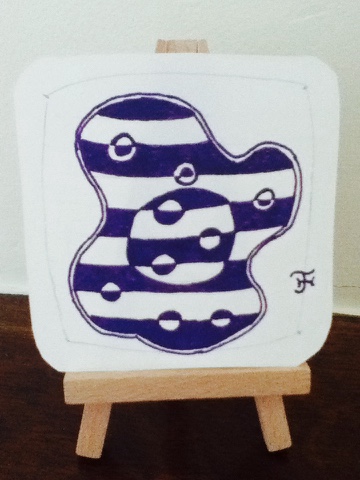 That's New To Me Challenge. 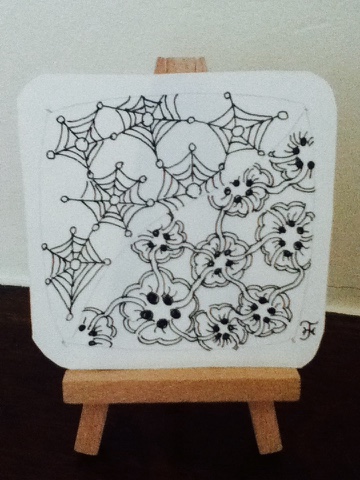 Posted by The Yorkshire Tortoise at 11:43