My Week 7. A convoluted path to Bijou.

When you start reading blogs you can take some very convoluted journeys if you start clicking on links, and it is amazing what you can learn. Last week I started out on SuzyMosh's Tangle Me Three page to see what you had made of the challenge. I came across Lynn Harvey's post about developing her style, which was very informative. It also had links to places which had instructed her, and so I clicked through on those that interested me (which actually was all of them). One link was to Cheryl Angiel's Rainbow Elephant blog, and a post she had made some time ago about repeat pattern stacks, something which Lynn had used to great effect in her tile. I expect some of you old hands have come across them before, but I am new here and I have never seen them. I thought they were such fun and read as much as I could about how to construct them. I tried drawing one or two, then I thought "A stack of Bijou tiles would be fun" and so for this week's Tangle Me Three Entry I have launched out, for the first time, into a larger sized ZIA of Bijous.

I would have liked to put a few extra funny bits amongst the stack, but I thought they might be interpreted as another tangle and then it wouldn't have fitted the bill for the Tangle Me Three Monotangle rules, so I stuck with just the bijou tiles. The bottom two Bijous are the original Boomarang tangle patterns. The second variation I put in the middle two and top Bijous. I just turned one line upside down and swapped boomerangs with the colouring in. For the third variation, which I put in Bijous 5 & 6, I blocked in the background rather than the boomerangs. So there you have it, a stack of Bijous:- 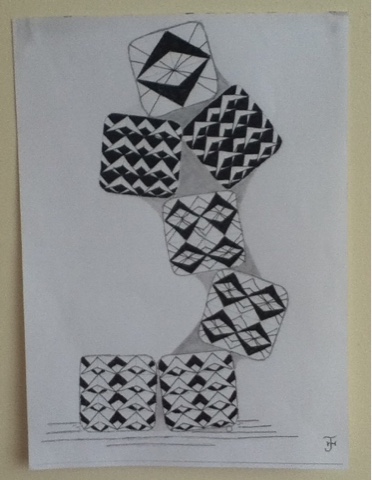 Posted by The Yorkshire Tortoise at 12:02