I have been hmming and hawing over what to tangle on for the Divas's Challenge this week. That is why I haven't visited any other entries yet. I usually have started that by now. Whilst I am on the subject of visiting blogs I want to say a big thank you to everyone who leaves comments on mine. Without you folks I would never have learnt so much about this hobby as I have. I do reply sometimes when a question has been asked, but I am never sure if the replies go through via email or not. Does anyone know?

Anyway, back to the hmming and hawing...... The only things I could think of were the usual ones that you see here and there on the Internet, some of which the Diva suggested in her blog. The trouble with me is that if something is shown or suggested in the challenge then I feel I have to try and think up something new of my own. Occasionally my little brain seems to freeze because the suggestions are so good and I simply can't get them out of my head - which leaves no room for anything to go in!

This morning I woke up and got my iPad out to do my usual early morning routine visits. I thought about Maria tangling various places around her home and also I had seen someone had tangled a mini-van. I thought about tangling around the toilet cistern handle, I thought it would make you all laugh, but somehow I didn't think my partner would be amused. Then it suddenly struck me - my iPad, - I love my iPad to bits and have never thought to tangle on it.

Unfortunately I have the black version of the iPad so, even if I found a glass marker to use it wouldn't show up against the black. The next best thing I could think of was my iPad cover and that was it, I sprang out of bed and rushed downstairs to try it out. First of all I did tiny practice zingers in the corner to see if my usual pens would work. They did! 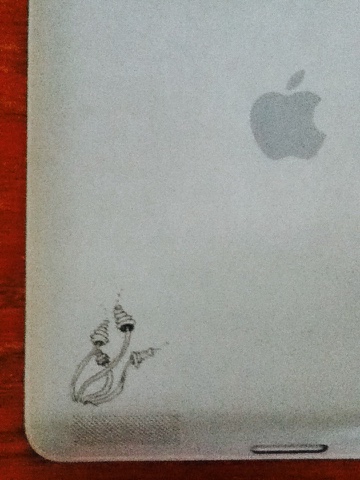 Whilst I was trying it out I came across small areas where the pen wouldn't draw, I assumed it was probably a bit greasy so when I had decided on which other areas to do I went over it with my eraser first, in the hopes of removing anything. Next I decided on some simple tangle patterns, as anything with pencil shading was not going to be possible. I started on the other corner using angelfish and Antidots with a little tipple. As I seemed to have a sort of sea thing going on along the bottom, at the top corner I used Florz as a fishing net and creweler as starfishes tumbling out.

I left it at that because I was running out of pens. I used 0.3 pens and I want to warn you if you are think of doing it yourself, it seems to wreck havoc with your pens. I got through 5 pens, two of which were brand new! I don't think I am going to be able to rescue them. The tips of the pens look ok, so I am guessing the surface coating must have gummed up the works - the cover is fairly grubby!. 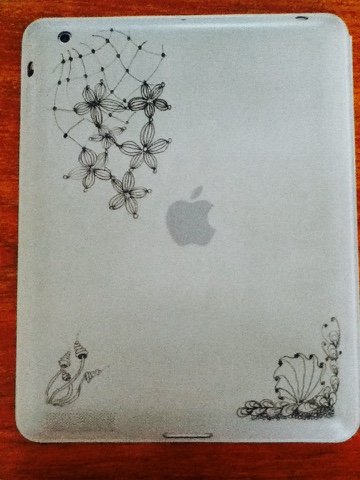 Posted by The Yorkshire Tortoise at 15:59