Here There Be Dragons.

Here in Ireland we have a dragon, his name is Lig-na- Paiste. There are several translations of Lig-na-Paiste, but the one I like is 'Last Great Reptile'. You may know that we don't have any snakes in Ireland, this is said to have come about because St. Patrick chased all the serpents out of Ireland. This included all snakes, worms and dragons, however the Irish Dragon called Lig-na-Paiste remained overlooked. He lived near the source of the Owenreagh River, and outlived Saint Patrick. He would often curl around a small green hill nearby and hold his tail in his mouth. Unfortunately after Saint Patrick died he started terrorising the neighbourhood until at long last St Murrough defeated it. He did this by putting reeds on the dragon, which the dragon thought would be harmless, but St Murrough turned them into bands of Iron which imprisoned Lig-na-Paiste and he has remained like this forever since. One of the Zentangle books I have is by Anya Lothop and in it one of her outlines for a ZIA was this dragon which I enjoyed drawing yesterday. It looked just like I had imagined Lig-na-Paiste would have looked.

The Diva this week tells us that it is Moebious Syndrome Awareness Day on Sunday. I was very interested to read about her son's disease, as this time last year I hadn't discovered the Diva Challenge, and knew nothing about Moebious Syndrome. I just love those photo's, they are all so cute, Artoo looks a lovely little chap. Apparently purple is the colour for MSAD so I decided to follow suit and do my tile in purple. 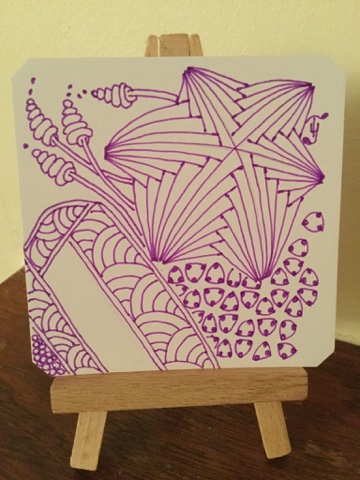 Next I decided to I should use Diva Dance in the tile. I use Diva Dance a lot, especially the rock 'n roll version, not just when Laura will see it. I really thought Laura should be represented in the tile as she has had to go through so much as well looking after that little boy. So where is the Moebious Logo we were asked to draw? Well you see, I drew it in the centre of a four tile ensemble and when you place them together this is what you get:- Posted by The Yorkshire Tortoise at 18:35