Yesterday late afternoon, after clicking on the Diva Challenge link for the umpteenth time, it finally dawned on me that maybe Canada was having a public holiday. Off I went to the amazing Google and yes, I discovered it was indeed a holiday. No wonder the new challenge wasn't coming up! Apparently in Canada February 15th is either Family Day, Heritage Day or Louis Riel Day depending  on which area of Canada you live in. I really must take more notice of Canadian holidays. Apart from Easter, as far as I can see, I think the next Canadian holiday is Victoria Day on May 23rd. I will go and make a note of it on my calendar. .

So whilst I was waiting for the challenge to arrive today I experimented with the drawing app on my iPad. It is just a basic app - Paper - but I thought I would see if I could tangle on it. I certainly had no luck trying to tangle on it with my finger, but I had more success using a stylus. The app, Paper, suggests buying their RL thing called Pencil, but I wasn't going to pay for something which I might not use again and I thought it could only be like a tablet stylus which I already had. My first attempts even with the stylus were not good, but I did manage to produce a rather large basic Knightsbridge. 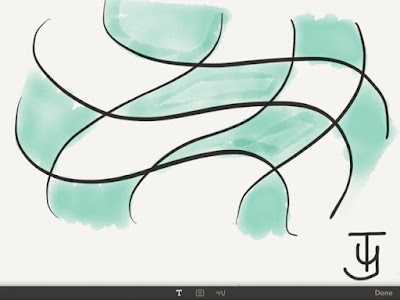 Then I discovered that it was easier to zoom in on part of the pattern and do sections at a time. I even managed to do a rather basic Arukas, which can be a tricky tangle even using  proper paper and pen. 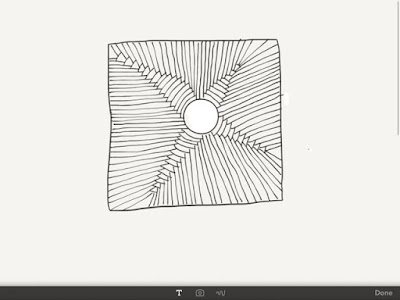 Eventually, after a couple of hours practice I managed to produce a decent looking tile using Chillon, Aquafleur, Ahh, and Bumper. I actually managed a bit of shading too :-) It is not a proper experience of course, but it was fun to try and whilst I won't be doing much tangling on my iPad, you never know it might be useful one day if I get caught short with no pen or paper to hand. 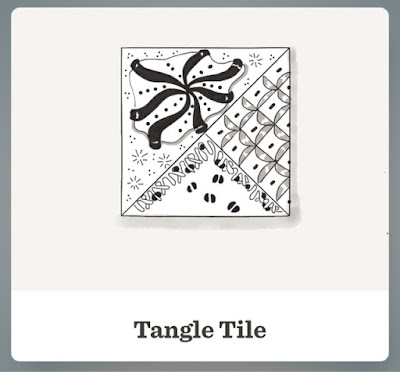 The Diva's Challenge this week is to look out a tangled tile from when we first started tangling and redo it now. I have not been tangling for long, I first found Zentangle® at the end of May, tried out a few patterns and then in June I discovered The Diva's Challenge and drew my first complete tile and started this blog. It was that time of year when The Diva does her Beads of Courage Challenge and this is what I drew. 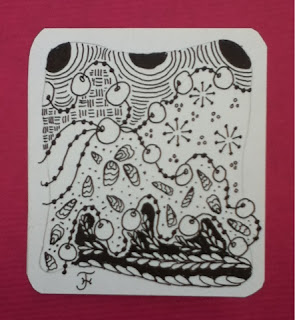 I remember I did not like the blocked section at the bottom and so I was able to alter that this time round. Also this time I have drawn the beads in the zengem fashion. I did it just to make it a bit different from the original, but I don't think they really make good beads. Apart from that, and a bit of shading here and there, I can't say I can see much improvement, which is strange because most of the time I think I could produce better tiles than this. Perhaps I used to put too many patterns into one tile, that would change things, fewer patterns and more room to draw them really well.
3 days later:- Now that I have visited several blogs and seen how others have done I notice that quite a few people have put less tangle patterns into their updated version so perhaps it is something newbies do - try to draw as many patterns as possible into the one tile :-) I am now sure if I completely redid this challenge I would not use these tangles and string, and would then see a big improvement. The Diva is bound to issue the Beads of Courqge challenge again this year, so it will be interesting to see when it happens. In the meantime this is the remake tile I did back on Tuesday. 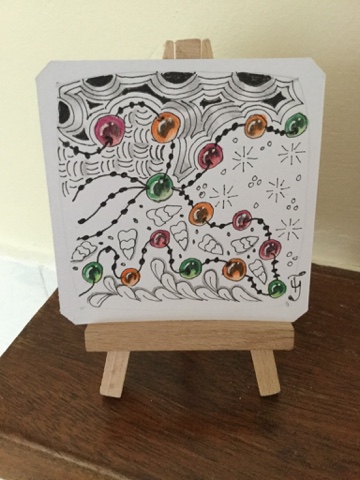