I am just back from a wonderful day out. It was forecast to be a hot sunny day and so it turned out. We wanted to explore a new area, about an hour away, to try and find some good parking spots from which we can set off on walks. If we could explore the area today we would be all set for walks during the coming summer.

The area is called the Slieve Gullion Forest and is just over the border in Northern Ireland. It was weird being back in the United Kingdom again. We stopped first in the main Forest car park where there is a little shop, as I wanted to buy some crisps to add to our lunch ( I love crisps squished into a sandwich, do you?) When I came to pay I suddenly realized I needed Stirling and I had left my English purse in the car! It is so weird needing two purses, after all we were only an hour away from home - and yet home is in another country!

Anyway we sorted it out and moved on to find somewhere as a base for walking. We followed a single track road through the forest and up the mountain and finally came across - a fire engine!!! 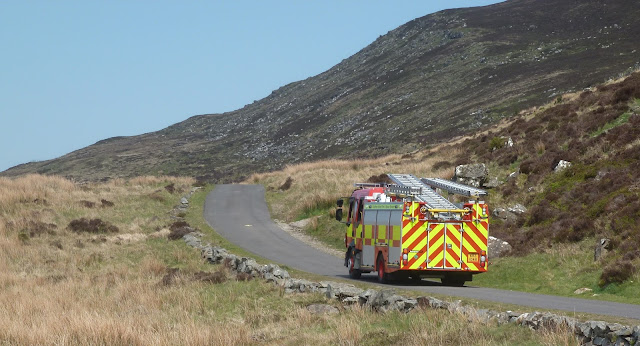 Well we had not expected to find that up a little single track forest road!! Goodness knows why it was there as I have never seen one in a forest or on the moors in 50 years of walking. It made me think of those terrible fires over in Canada that the Diva mentioned. We do see the odd fire at certain times of the year, but those are controlled burnings by land owners or rangers, not bush fires gone wild.

There were wonderful views 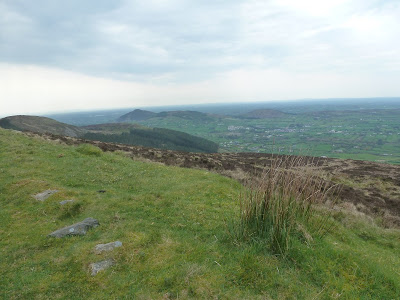 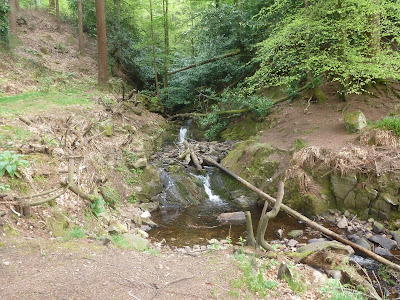 and then as we walked into the forest we came across this little waterfall.
I got all excited when I saw this:-. 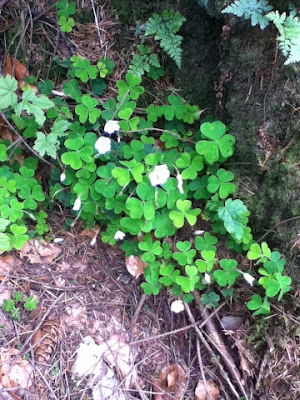 I thought I had found Shamrock growing in the wild, but it turned out to just be wood sorrel :-( Apparently Shamrock is similar but has much smaller flowers. Oh well, better luck next time.

Fortunately The Diva and her family are safe, and hopefully far enough away from the fires, so she was able to set us another Challenge for this week. For my duotangle of Pokeroot and Drupe I decided to draw a huge Pokeroot and put Drupe into it with both black and white Pokeroot drooping out of the Drupe. (Did you see what I said there :-) I had intended to use a third black drupe band around the edge to make the large Pokeroot, but when I did this the huge Pokeroot disappeared so I left it with just the outline. 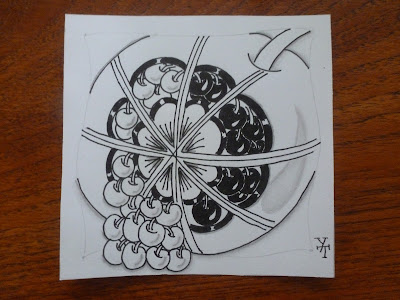 By the way, there has been an update to Zentangle's Mosaic App and it now has a Tangle Step-Out section - Hurrah :-) These are official Zentangle tangle pattern step-outs, so far only 20 of them, but I am assuming more will be added in future updates. Beside each title is the name of the person who deconstructed it and also the person who named it, which is quite interesting.

Also this week I suddenly remembered my dice and Zentangle legend from the starter box and this is what I did in my sketch book. You would be amazed to know that #11 - Hollibaugh - came up 9 times! I only used it in three sections and rolled again for the rest. Maybe it was trying to tell me I should do a monotangle lol. Posted by The Yorkshire Tortoise at 21:59