Calling all Trekkies and Whovians

I must have had a rush of blood to the head this week because my tangling has been a bit zany. I have mentioned before that I am a Sci Fi addict. I am talking real Science based Sci Fi here, not that fantasy stuff they now lump into the genre these days.

Do you remember my holiday where I photographed the Star Wars set in Ireland that you needed a magnifying glass to see anything? Well the Irish newspapers have now been busy with their cameras trying to get pictures, but due to the guards around there they are having about as much luck as I did. In fact mine is more artistic because of the pottery Greek urns in the foreground. Honestly sea, cliffs, Greek urns and Star Wars, it could only happen in Ireland lol ! The actors have started to arrive and next week they are even closing down the air space around there while they film, talk about paranoid!! 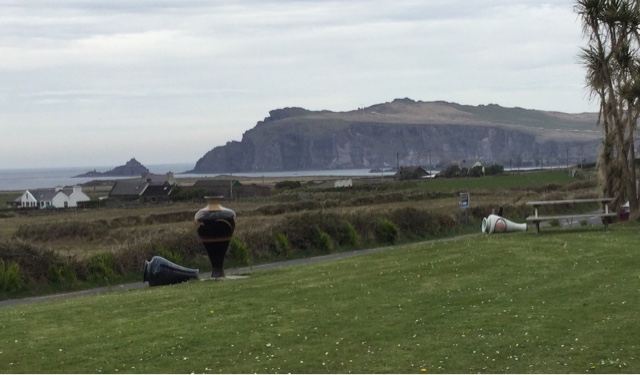 Anyway when I sat down to tangle the other day, and was trying to think of a string, I suddenly thought a Star Trek logo/communicator outline would make a good string. How could I have not thought of it before? 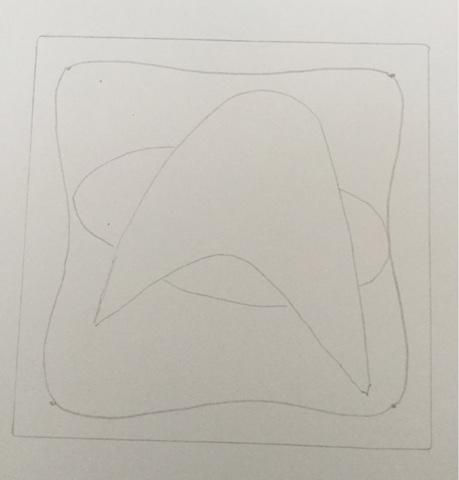 I used one of the new official tangles - Patena - in the background and then I realised it looked just like the communicator was caught in the Q Continium ( you need to be a ST Next Generation fan to understand that bit !) 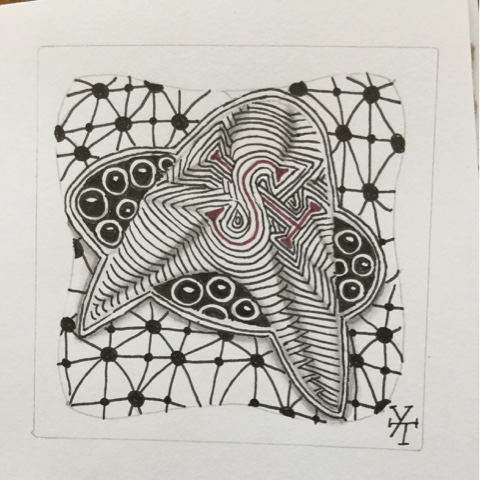 That all set off a train of thought. I remembered Maggiebee saying she was a Dr Who fan and I thought I should do a tile for her and any other Whovians out there. After all Dr Who began my interest in Sci Fi as a 9 year old child, stereotypically hiding behind the sofa for the frightening bits. Then I started reading books like John Wyndam's Day of the Triffids etc. and when Star Trek began three years later it, along with my Arthur C Clarke books, moved my Sci Fi interest on out into Space.

So here is my Dr Who tile, for 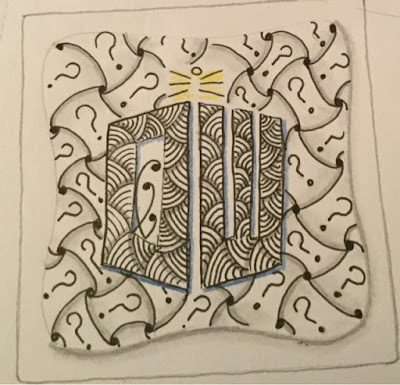 (And that DW Tardis/logo shape is not easy to replicate!)

On to the next zany tile. Our Ol' Queenie turned 90 yesterday which set off yet more great celebrations. She really is amazing, how she still stands there at functions shaking a million hands I don't know, I have trouble standing for ten minutes without getting backache and wanting to sit down - and I am only 60, what I will be like in 30 years time I dread to think. Anyway whilst I was watching the celebrations on the TV (all horses and boring as heck, but I suppose she enjoyed it) I drew this ZIA with her in mind. I used the tangle pattern Eez for Elizabeth to outline the 90, then set off Fireworks around it and drew Crowns in the bijou sections below. (I had intended to draw three different tangles in the bijou areas but got a mental block when trying to think of other patterns with Queenly connections so stuck with the three crowns.) 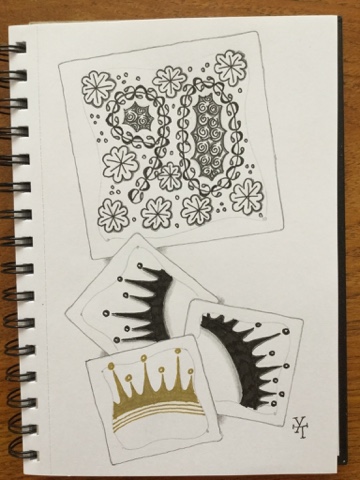 Now here we are at the Diva's Challenge where she has suggested we introduce some black. I have just started practising black pearl tipple on a black background and decided to do a tile introducing black that way. I have used the back of a Zentangle® tile because they are too hard to obtain in Ireland to waste the space by just signing your name on the back ;-) 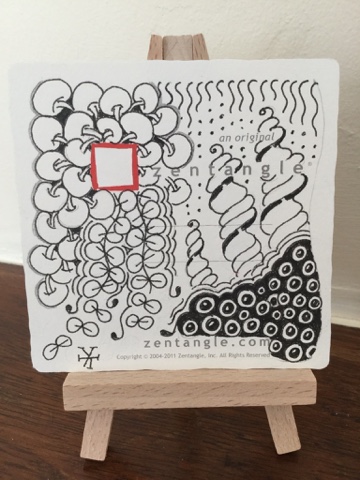 Posted by The Yorkshire Tortoise at 17:58