YT enters the room, dragging a crate behind her, slips *hic* over the corner of the rug, falls on her bottom *hic* and at the same time raising a glass whilst singing:-

"Oh there you are, have a glass, grab a bottle of fizz from the crate and join in :-) "

Yes, it is one whole year since I first discovered Zentangle® and started this blog! Well technically I discovered the Zentangle® Method a fortnight earlier in May, but for some reason it didn't immediately grab me!!! Can you imagine that!!! It was actually another two weeks before I returned to it and became a Zentangle Zealot. It is easy to remember because I created the blog to post a tile I had drawn for The Divas's Challenge and the challenge one year ago was - guess what - The Beads of Courage :-)

During my working life I was a Peadiatric Nurse, training and working at Great Ormond Street Children's Hospital, London, as long ago as the 1980/90's. I wish we had heard or thought of the Beads of Courage then, they sound brilliant, both as a reward and as a story of the children's journey.

For The Diva's Challenge this year I thought at first that I must try hard to do something really fantastic to show how much I my tangling had developed since last year. Perhaps those marvellous gems or something, but in fact I ended up doing something much simpler than last year. A Monotangle of Nipa had immediately come to my mind. If I coloured the orbs to turn them into Beads of Courage it should be just right, and also added a couple of square beads. 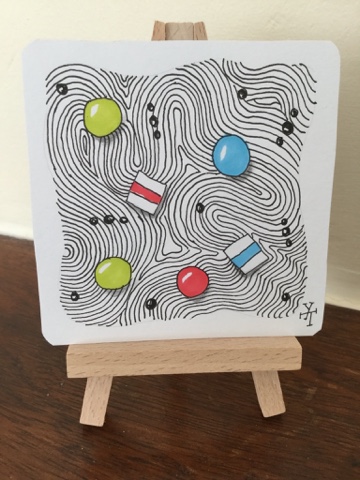 After the week's break last week I am looking forward to visiting all your blogs and seeing your beads.
Posted by The Yorkshire Tortoise at 16:52